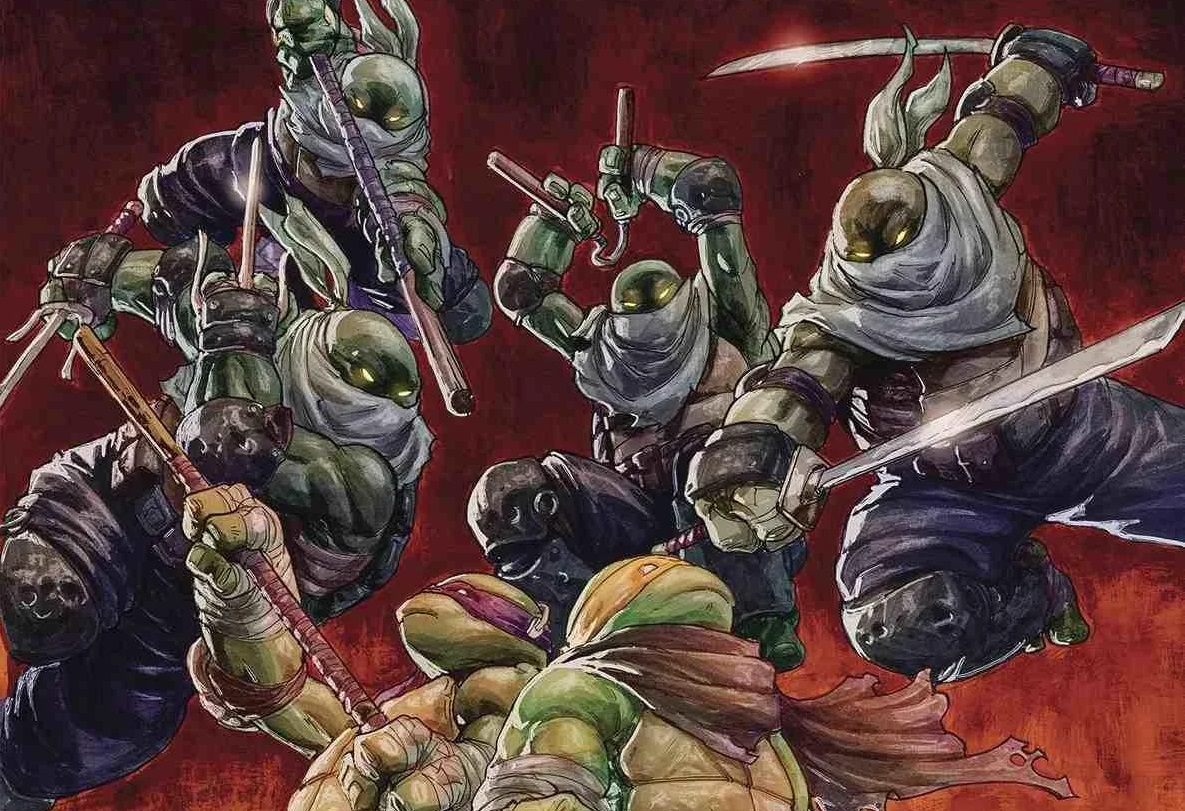 IDW’s Teenage Mutant N9inja Turtles: The Armageddon Game comic book series is about to change up things within the TMNT universe.

Teenage Mutant Ninja Turtles: The Armageddon Game will introduce readers to four new mutant turtles. The four new turtles were revealed back in April during Free Comic Book Day, but it’s still a mystery as to who they are. Could they be clones? The mysterious turtles do wield the same weapons as the original four. IDW will release the eight-part series on October 12th. Take a look at the cover art below.

With Leonardo, Michelangelo, and Raphael away in search of new allies to join the good guys against Rat King’s latest deadly gambit, it falls on Donatello and Jennika to lead the fight in Mutant Town against the terrible trio of Mayor Baxter Stockman, General Krang, and Madame Null. But will a dangerous quartet of masked mutant ninja turtles and a mad vivisectionist bent on revenge-not to mention E.P.F. invaders and angry Utrom soldiers!-sabotage their efforts before they can even begin to dig in? This new arc serves as a direct tie-in to TMNT: The Armageddon Game!

Cover A by Fero Peniche

Cover B by Kevin Eastman

Sean Marshall
August 26, 2022August 26, 2022
Image Comics' Bestselling creator Jonathan Luna (The Phalanx, 20XX: Transport), is returning with a one-shot illustrated in graphite called The...
Sean Marshall
August 23, 2022
Image Comics David Hine & Brian Haberlin are teaming up again to bring fans their one-shot The Marked: Halloween Special.  “I...
Sean Marshall
July 22, 2022
Disney's Gargoyles is being revived, but sadly it won't be as an animated series but will be for the comics....
Sean Marshall
June 22, 2022
Tillie Walden's graphic novel based on Clementine from Telltale's The Walking Dead games gets a part 2! The sequel to...
Sean Marshall
September 8, 2021
DC released a trailer for their upcoming hardcover anthology comic book Batman: The World! Check out the trailer below! Marking...
Sean Marshall
July 27, 2021July 27, 2021
Warner Bros. DC & Spotify made a deal last year to move forward with an all-new narrative podcast that will...
Loading Comments...