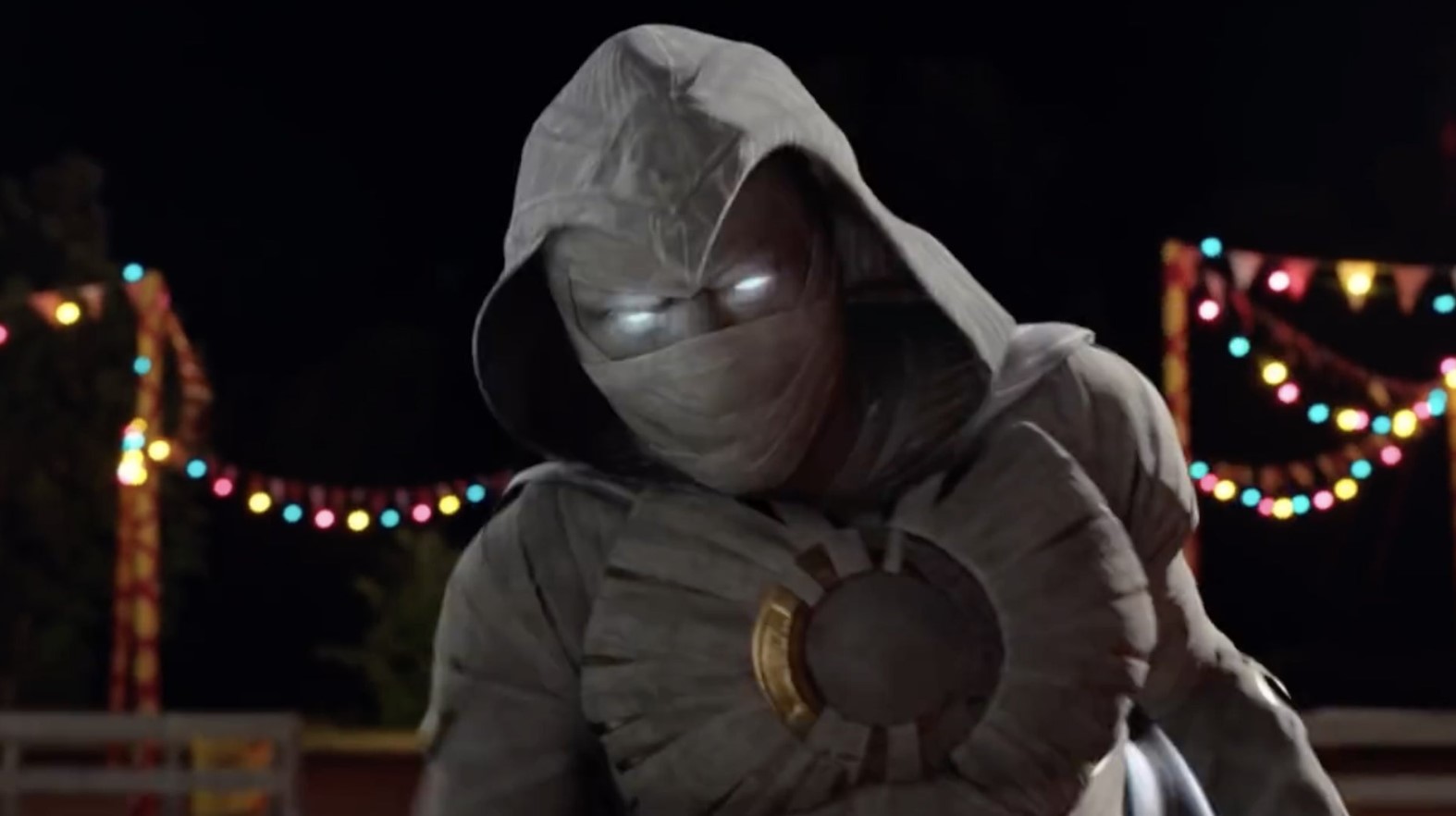 The episode opens up with Layla talking to a woman, who seems to have raised her after her father’s passing, & she sheds some light on her past & her current situations. This was a good way of having viewers connect to Layla as a character. After that brief introduction, we see Harrow arriving with his followers at Ammit’s tomb, but the celebration takes a brief pause after one of Harlow’s followers tells him that Marc has arrived & is hunting them down.

In case you wondered, we’re spending this episode getting to know Marc more & get to see him kick some villainous butt. Marc is trying to find a man who has some information that will lead him to Ammit’s tomb, but three assassins kill the man on a rooftop. This is where we see how Marc’s cockiness & hand-to-hand combat skills balance out his shattered mind. Yes, I said shattered mind because, during his fight with the three assassins, Steve appears in the reflection of the knife & Marc blacks out, appearing in a cab heading to the airport. Marc sees the assassins as he’s in the cab and chases them down, but Steve appears again in the reflection of a mirror, causing Marc to blackout again, but this time he has killed two of the assassins & is standing on a cliff. Marc, thinking that it was Steve who killed the men, asked him what he did, but Marc said it wasn’t him. However, one of the assassins, a kid, was left alive & Khonshu tells Marc to take him to the edge of the cliff. When Marc asks the kid where the tomb is, the kid cuts the fabric that Marc is holding him by & says: Praise Ammit,” & falls to his death.

Marc checks Steve by telling him to stop interfering with his time in the body, but again, Steve tells him that it wasn’t him & that he should take his questions to Khonshu. Since Marc has no other plans up his sleeves, he relies on Khonshu to come up with a plan to contact the other gods so they can help him prevent the awakening of Ammit. This was an eye-opener for fans that have stuck with the Marvel Cinematic Universe from the beginning because we now have confirmation that there are actual Gods in the MCU. For those who may say that Thor or the Asgardians are gods, you’re incorrect, as they consider themselves aliens that are worshipped as gods. I also like how Khonshu caused a solar eclipse to contact the other gods & that he somewhat fears that if he angers to gods too much with his actions, they will imprison him.

Another exciting move here by the writers was that they revealed that the other gods also use avatars when they are on earth & that they are all on different parts of the planet. The meeting of the gods takes place in the Pyramid of Giza & doesn’t go the way Khonshu hopes. The gods listen to him explain how Harrow is trying to summon Ammit, but since they don’t trust Khonshu, they decide to summon Harrow to the meeting & this is where we get to see how cunning Harrow is. Instead of Harrow admitting his wrongdoing, he chooses to tell the gods that Khonshu is the one trying to summon Ammit & that he’s manipulating Marc, who is suffering from multiple personalities. This weakens Khonshu & Marc’s stand against Harrow & the gods pull away from this summoning, not punishing Harrow. However, there is a light in the dark. One of the avatars, Yatzil, who Hathor possesses, tells Marc to find the sarcophagus of a medjay who knew the location of Ammit’s tomb.

The sarcophagus is in possession of an old friend of Layla’s, Anton Mogart, who comic book readers will know as Midnight Man. When Layla & Marc finally get to the sarcophagus, things go downhill as Harrow appears & decides to show Anton the power he wields. Soon after, Marc summons the suit & takes down Anton’s men, but as he’s about to kill one of them, Steve forces his way out & appears in his Mr. Night suit. This scene was hilarious, especially when Steve started getting stabbed & couldn’t handle it, so he called on Marc to take over again.

Marc & Layla escape & head out to the middle of the desert to find the tomb, but they’re stuck due to their lack of knowledge of the puzzle. Layla asks Marc to swap out with Steve since he has more knowledge on this subject & even though Marc initially resents the swap, he does it. Steve puts the puzzle together & has a powerful moment with Steve, where Khonshu summons the Mr. Night suit on Steve & they both work together to turn back the night’s sky, which is a stunning scene. However, because of Khonshu’s actions, the Egyptian gods imprisoned Khonshu, which caused Steve to pass out. Following this scene was a predictable moment that showed us that the gods were working with Harrow.